11/25-26
Delphine, Christine, Saka, Anne, Mariah, and myself left for Togo!! Our bus left at 9pm from Kumasi bound for Aflao. We arrived in Aflao at about 7am. We had bought food for snacks and breakfast before we left.
The moment we got off the bus in Aflao, we were bombarded by people wanting to help us. One woman took us to some bathrooms and tried to lead us to the places “we needed to go to.” We kept saying that we did not need her help but she insisted upon following us around. We figured as long as we hurried to the border she would not be allowed to cross. We bought bus tickets for the return home, then left Ghana.
Once at the Togo border, we still had the woman and now a man following us. To exchange money in Togo from Ghana Cedi to Franc CFA, we had to barter for a good rate on the street. Some girls changed over in Kumasi, but I was not sure how much I would need so I waited. I had some idea of what the rate was because of them, but it was probably not accurate. The man checking passports and issuing Visas at the border was just choosing obscure prices for us to pay. I paid 15,000CFA, Mariah from Canada paid 20,000CFA, and everyone else from Sweded, Japan, France, and Holland only paid 10,000CFA…oh well…Once in Togo, we still had our “friends” with us. The manager at the Hotel Marianne, where we were staying sent a taxi to pick us up. OF COURSE the woman who had been “leading” us around all day wanted to be paid and so did the man. We got in the taxi and left…quickly. It was a little scary. We drove right along the Lome coast to get to our hotel. We stayed in one room with 6 beds that had a shared bathroom. The toilets had no seats either…We were exhausted from traveling all night, so we went to the beach to relax. The waves were not huge, but bigger than a lot of waves on the Atlantic side. The water was not clear, but the palm trees lining the coast were beautiful!!! People in Togo love to stare, especially at white people tanning on the beach. The Togolaise people use the beach for laundry, fishing, and as a litter box…literally! There were people peeing and pooping all along the coast. We had to watch our step.

After getting tired of being stared at, we went back to the hotel, rested, then went into the market. There was so much food, a lot of fish , and many clothes. I bought several fabrics to have dresses and skirts made at home.
We went back to the hotel to relax before dinner. We had some beer made in Togo, and a great dinner. We watched the sunset over the veranda where we sat and ate dinner.
11/27
This morning we went to the Voodoo market. I do not know what I was expecting, but there were just tables set up with animal skins, bones, skulls, hair, from every animal in Africa! Then little rooms off the side where the Voodoo priest sat to bless the items. We got a tour and learned about what most things mean. We then could buy different “fetishes” for good luck, safe traveling, love, confidence, etc. We then did a little ceremony to bless our items. They told us that all the animals died naturally and are then sent to the market. Supposedly this is the main Voodoo market for all of West Africa. Animals are shipped to and from the market from all over. There was a cage of live rats, several live turtles and chameleons.


There was even a little monkey chained to a tree in the back…we questioned the humanity of the market…
We asked the manager at the hotel if he believed in the Voodoo. He responded that he is African, and it is part of the culture and heritage, so it is natural to believe in these rituals. Along the way we picked up 2 guys that hailed taxis for us and came along with us to show us around. We made sure they knew up front we would not give them money. There only stipulation was that we go to one of their family’s shops. The shop sold carved wooden pieces that could be bought in Ghana or anywhere. Everyone claims they make these wood things, but they are everywhere!!
We again ate dinner on the veranda of the hotel.

11/28
This morning we did some shopping around the markets; we then went to Lake Togo. We went to a private hotel’s beach on the lake. The whole lake was maybe 5 feet deep. The sand and palm trees were gorgeous. We took a canoe ride around the lake. 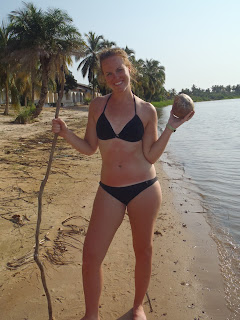 11/29-30
This morning we went to the beach and market one last time. We had lunch at the hotel then headed to the border to return to Ghana. Togo is a French speaking country so without Delphine it would have been next to impossible to get around. Returning to Ghana was simple and free! We got to the bus station where we already had bought our tickets only to find that the bus never arrived from Kumasi, so there wasa no bus returning to Kumasi…We had to take the Metro Mass on the 12 hour ride home. We arrived back in Kumasi at 3am. We took a taxi home and went right to sleep. I don’t think I have appreciated Ghana as much as now. My house here, the people, the conveniences-while not like America-are so nice to return to. I feel safe in Ghana and at home. Togo was beautiful and a fun experience, but not a place I would want to spend any length of time.
Tonight for dinner we had Banku. It is a traditional Ghanaian dish with a squishy corn mush ball, in a SPICY red tomato stew with pieces of meat! 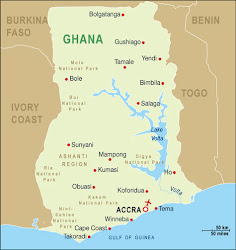